UNITED NATIONS: Third Committee approves the UN Declaration on the Rights of Peasants and Other People Working in Rural Areas

The Third Committee (Social, Humanitarian and Cultural) of the UN General Assembly voted in favour of the UN Declaration on the rights of peasants and other people working in rural areas, through the Resolution no. A/C.3/73/L.30.

The resolution was approved by 119 votes in favour, 7 votes against and 49 abstentions. It is a significant leap forward in a campaign led by La Via Campesina, the world’s largest peasant movement supported by many organizations across the world, including FIAN and CETIM.

The UN Declaration aims to better protect the rights of all rural populations including peasants, fisherfolks, nomads, agricultural workers and indigenous peoples and to improve living conditions, as well as to strengthen food sovereignty, the fight against climate change and the conservation of biodiversity. The endorsement of the UN Declaration also constitutes an important contribution to the international community’s effort to promote family farming and peasant agriculture.

Bolivia, the chair of the process, stressed upon the importance of the UN Declaration in realising more resilient, sustainable and inclusive societies:

“We believe this is a major step towards public policies that recognize not only the rights and needs of peasants but also their contributions to the well-being and quality of life of the societies they nurture through their daily work. We are sure that this instrument will play a central role in human rights as well as in the eradication of hunger and poverty, in line with Agenda 2030 for sustainable development and the Decade of Family Farming, without leaving anyone behind.”

Since its adoption at the UN Human Rights Council in Geneva in late September, La Via Campesina and its allies’ focus has been to make sure that this UN Declaration is adopted by the UN General Assembly. La Via Campesina delegates who have been present in New York since the beginning of the Third Committee session expressed their satisfaction after the voting results.

“In this historic moment, in which financial capital and corporations are deepening their offensive to monopolize food and concentrate land and natural goods, at the cost of our lives, the adoption of the Declaration of Peasant Rights in the Third Committee of the UN General Assembly is a strategic victory, not only for peasants but for the peoples of the world as a whole. We will continue on this long path of struggle and unity, for rights and social justice, convinced that full democracy is only possible through Agrarian Reform, the social function of land and the full enjoyment of the rights of peasants”, said Diego Monton La Via Campesina (CLOC)

The Committee’s approval of the UN Declaration was marked by some debate but it benefitted from a consistent support from Africa, Asia and Latin America regions. Some negative reactions came from Europe and other regions, with the US delegation rejecting the text as they have longstanding concerns about the UN Declaration, which sought to expand upon existing rights, singling out the human rights of peasants above those of other groups, and also on the collective rights stipulated in the contents. The European countries were divided in their response.

“In the Third Committee, where all the UN countries participate, we have witnessed a great diversity of positions in Eastern and Western Europe. For those who supported us, we thank them greatly. Your votes in favor put human values in the human rights, giving hope for millions of peasants, men and women, across the continent. For those who abstained or voted against, we wish to tell you that peasants and small family farmers in your countries cannot be left behind”, said Ramona Duminicioiu from La Via Campesina Europe.

“After December’s UNGA approval, we will start a new chapter of the Rights of Peasants and we are demanding that all UN countries commit themselves to implementing the Declaration. We are determined to contribute to a better society, to fight climate change, to end hunger, to provide diverse and nutritious food for everyone”, she added.

Zainal Arifin Fuat, from La Via Campesina Asia,  said that this declaration is a landmark moment in the peasants struggle.

“The Declaration acknowledges the prominent role that peasants play in solving multiple crises facing us today – food, environmental, social and economic. Peasants are essential to food security and sovereignty and the realization of the right to food, particularly in developing countries where they provide up to 80% of the food locally consumed. This UN Declaration will also contribute to the humanity’s efforts to end poverty, hunger and achieving our sustainable development goals. In Asia, we believe that if our rights are recognized and further protected, people will be able to develop rural areas and then avoid the rural-urban migration that creates insoluble problems”, he added.

“The scramble for resources that is going on in the African continent and elsewhere has put peasants in an extremely vulnerable position. The ongoing attack on peasant seed systems have repercussions that go beyond those who produce the food. It indeed affects everyone. For 17 years we have been patiently campaigning for an international instrument that can protect our rights as peasants and to guard our food systems from being dismantled to favour a few. It is a proud moment today for millions of peasants worldwide, who never give up when faced with adversity”, said Elizabeth Mpofu, General Coordinator of La Via Campesina

“The power of the peasant movement is being felt at the highest level of international governance: for this, we must acknowledge the hard work and passion of so many peasants worldwide. The solidarity of peasants internationally is a testament to how closely we and our issues are linked, regardless of where we live. However, today is only a stepping stone on the long path of human rights justice for rural people. We must carry forward this momentum and put the declaration into action at every level of society,” said Jessie MacInnis, La Via Campesina North America

The UN Declaration will be formally ratified by the UN General Assembly on December 2018, following the decision taken by the Third Committee this afternoon.

Information Note on UN Declaration can be downloaded here

Full text of the Resolution and Declaration is here

On 28 September 2018, at the 39th regular session of the United Nations Human Rights Council (UNHRC), 47 member states (47 is the number of countries members of the UNHRC) voted for the adoption of the Declaration on the rights of peasants and other people working in rural areas. With 3 votes against 11 abstentions and 33 in favour, the Declaration was approved by majority at the UNHRC.

Against (3): Australia, Hungary and the United Kingdom

* No EU country voted in favor. EU recorded 2 votes against and 6 abstentions.

The Declaration translated in all UN languages (can be found in the webpage of the 5th OEWG: https://www.ohchr.org/EN/HRBodies/HRC/RuralAreas/Pages/5thSession.aspx

The Resolution translated in all UN languages (it contains in the annex the Declaration in English only): http://ap.ohchr.org/documents/dpage_e.aspx?si=A/HRC/39/L.16

The resolution of the European Parliament which includes an article in support of the Declaration: https://www.eurovia.org/the-european-parliament-demands-that-eu-members-states-vote-in-favour-of-the-peasants-rights-declaration/

The resolution of the European Economic and Social Committee in support of the Declaration: https://www.eesc.europa.eu/en/documents/resolution/declaration-rights-peasants-and-other-persons-working-rural-areas

The Special Rapporteur for the Right to Food – Hilal Elver‘s official letter in support of the Declaration:https://hilalelver.org/wp-content/uploads/2018/09/SR_RtF_Letter_Peasants-Rights-HE-edited.pdf

Official statement of the Food and Agriculture Organization of the United Nations – FAO, in support of the Declaration: https://www.ohchr.org/Documents/HRBodies/HRCouncil/WGPleasants/Session5/FAO.pdf

The European citizens petition to support the declaration: https://you.wemove.eu/campaigns/peasants-rights

After the approval of the UNHRC the declaration has been sent to the Third Committee of the General Assembly for Social, Humanitarian & Cultural Issues at the UN headquarters in NY.

This Committee has the mission to evaluate, debate, negotiate and decide through vote or consensus – the adoption of the declaration, and send it for its formal and final vote at the UN General Assembly.

25th of October: the Bolivian delegation in New York presented the declaration at the Third commission of the United Nations in New York, followed by a countries debate. Video recording of the presentation and the debate – starting at min 58:00 – http://webtv.un.org/search/third-committee-34th-meeting-general-assembly-73rd-session/5853553897001/?term=&lan=english&page=3

In order to convince member states, we also need public support and get media attraction, here are some ways to help us:

The Declaration for the Rights of Peasants adopted at the Human Rights Council: a historic vote with worldwide support

Only a few but meaningful countries in Europe join the international community in defense of peasants rights.
The text will be presented to the United Nations General Assembly in the coming months.

Geneva, 28 September 2018 – With 33 votes in favor, 3 votes against and 11 abstentions, the “Declaration of the rights of peasants and other people working in rural areas” was approved this morning by the Human Rights Council of the UN and will be presented in autumn 2018 at the UN General Assembly in New York. This vote is a huge success for all peasant organizations, pastoralists, artisanal fishermen, indigenous peoples, rural workers who along with La Via Campesina carried and defended this declaration in their countries, and at the Human Rights Council.

Three countries from our region stood out for their commitment to defend the rights of vulnerable rural communities and voted in favor of the text : Switzerland – a long term supporter; Ukraine – a committed first time member of the Human Rights Council ; and Portugal – a country who made great efforts to moderate the position of EU countries and who co-sponsored the Declaration. ECVC wishes to extend its gratitude to the supportive European countries who stood up for the dignity of peasants and rural communities.

Despite this victory, the European Coordination Via Campesina (ECVC) deplores the lack of commitment of European Union countries in favor of the declaration. “Germany and the European Union often express their support to human rights protection, to the development in the South and to family farming. But in this very crucial moment of needed action they opposed the  declaration and isolate themselves from the international community. This is neither understandable nor acceptable.” said Paula Gioia , member of the German Arbeitsgemeinschaft bäuerliche Landwirtschaft (AbL) and ECVC.

“I am very disappointed, recognized Jose-Manuel Benitez, farmer from Spain. We had hoped that Spain would follow Portugal, Ukraine and Switzerland. We had high expectations for a vote in favor of the thousands of peasants who are struggling for a decent income and recognition in our country.” 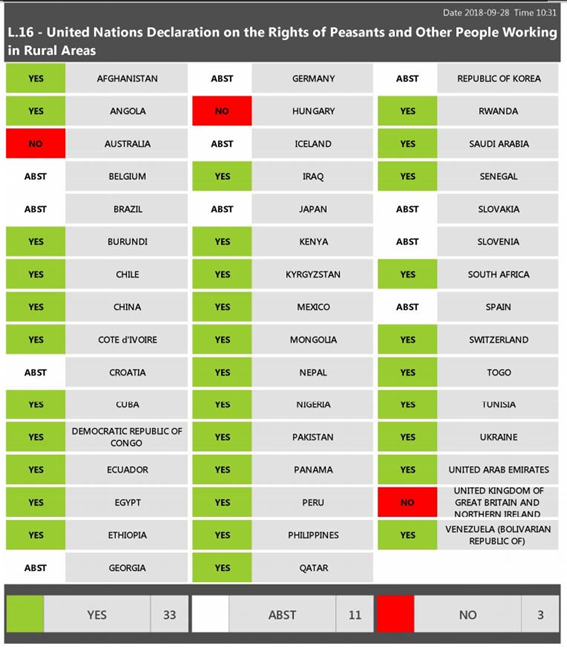 This comes in contrast to the support for the declaration already expressed by major  EU institutions. In July the European Parliament adopted a resolution “calling on the EU and its Member States to support the declaration on the rights of peasants and other people working in rural areas and to vote in its favor at all levels of UN decision making processes”.

The UN Special Rapporteur for the Right of Food, Hilal Elver, urged all UN member states to vote in favor of the Declaration. In her official letter, the UN representative said «the imminent adoption of the Declaration will be a significant sign of progress, a proof of the serious and urgent preoccupation of the international community for building solutions to eliminate hunger and malnutrition as well as poverty and promote sustainability in agriculture and food production. »

A European petition gathered more than 72,000 signatures in a few weeks, and many voices of support were heard as the vote approached. Also, a petition launched by  UK citizens gathered the support of over 5000 people in 24 hours.

ECVC notes with regret that the interests defended by Europe are not aligned with the aspirations and needs of its citizens for food produced on farms on a human scale, and which demand that the rights of producers are recognized and protected!

We demand all European countries to review their position towards the final approval of the declaration in the UN-General Assembly in the upcoming months and to follow the example of Portugal, Ukraine and Switzerland.

Post and header image from European Coordination Via Campesina (ECVC)